Tricks from the Pros

I attribute the long reach of the Panasonic-LUMIX TZ3 lens along with the built in stabilization to get this shot. I also set the point-and-shoot′s LCD screen to "brightest" to be able to carefully compose the photograph in the bright sun at Yellowstone National Park. © Russ Burden, Denver DPA Instructor

Summer time brings plenty of opportunities for outdoor shooting. Check to see what special events are occurring in your area, such as this visit by the Columbian Navy tall ship to Baltimore, MD © Jon Canfield, DPA Seattle Instructor

Shooting from a Plane

Shooting from a plane can give you interesting views of the world. In order to avoid distortion, you need to keep the lens parallel to the window. If you have a polarizing filter, you can use this to help reduce glare. Don’t put the camera lens against the window though, because the vibration will ruin your photos. © Jon Canfield, Seattle DPA Instructor

Use a Low Camera Angle for Impact 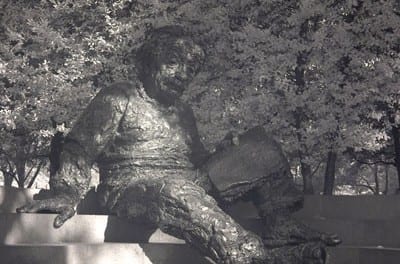 I particularly like the Einstein Memorial at the National Academies of Science. The memorial is located on the north side of Constitution Avenue, NW, at 21st Street, Washington DC. A low camera angle often adds impact and cleans up a background. This memorial is a tactile, climb-on-able, visually interesting object that is always fun to photograph. The attached image was taken with a digital infrared camera. © 2007 Bob Blanken, Washington DC DPA Instructor From Wikipedia: The Albert Einstein Memorial is a monumental bronze statue depicting Albert Einstein seated with manuscript papers in hand. It is located in central Washington, D.C., United States, in a grove of trees at the southwest corner of the grounds of the National Academy of Sciences on Constitution Avenue, near to the Vietnam Veterans Memorial. The statue was sculpted by Robert Berks in 19 sections and then welded together. It weighs 7,000 pounds (3.2 metric tons) and would stand 21 feet (6.4 m) high. The statue sits on a bench that is white granite from Mount Airy, North Carolina. The statue and bench are at one side of a circular dais, 28 feet (8.5 m) in diameter, made from emerald-pearl granite from Larvik, Norway. Embedded in the dais are more than 2,700 metal studs representing the location of astronomical objects (Sun, Moon, planets, 4 asteroids, 5 galaxies, 10 quasars, and many stars) at noon on April 22, 1979 when the memorial was dedicated. The studs are different sizes to denote the apparent magnitude of the relevant object, and different studs denote binary stars, spectroscopic binaries, pulsars, globular clusters, open clusters, and quasars. Written on the papers held in the statue′s left hand are three equations, summarizing three of Einstein′s important scientific advances: the photoelectric effect: the theory of general relativity: the equivalence of energy and matter: Standing at the center of the floor patterns and speaking towards the statue produces an interesting acoustic echo.

These umbrellas and chairs caught my eye as I drove through the California beach community of Ventura. The pattern of yellow umbrellas, dark green chairs and bright sand was irresistible. Although I normally photograph beaches early and late in the day, the colorful umbrellas dictated a mid day approach using a polarizing filter to saturate the blue sky and yellow fabric. Using the compositional rule of thirds, I framed a walkway on the left side between the chairs emphasizing the perspective and leading the viewer out to the ocean. Placing the slot between the chairs off to one side makes the image much more dynamic than placing it in the center. This image is, after all, about graphic design. © 2007 Chuck Place, Los Angeles DPA Instructor

Capturing the crowd at a summer festival is one way of conveying the unforgettable energy of the event. Many times an interesting pattern can be captured in all of the faces of the crowd. © 2007 Frank Siteman, Boston DPA Instructor

In your quest for epic photographs, don’t ignore what’s directly in front of you. Even a pair of wet jeans drying on a porch beam can offer a chance at great expression. As photographers, we tend to ignore the everyday world and keep our attention on spectacular vistas, epic sunsets, and floral scenes. Rubbish! In this image, a strong perspective and good composition transform the everyday into something much more rich. The colors in the image are reduced to two: green and blue. The shadows on the jeans set up a strong diagonal line that gets reinforced by the puffy white clouds. Minding the negative space keeps the eye moving around the jeans much like the gentle breezes these pants flew in. The best ideas are sometimes right nearby.     © 2007 Rick Wright, Philadelphia DPA Instructor 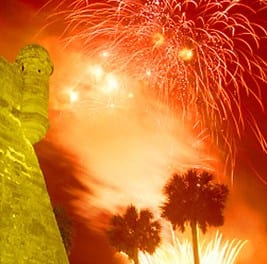 4th of July celebrations are always fun to photograph, especially the fireworks. But how do you take a meter reading of fireworks? They don’t hang around long enough. Although they look tricky, fireworks actually expose themselves. With your camera mounted on a tripod, set your ISO to 100 and your aperture at f5.6. All you have to do is keep your shutter open long enough to capture two to four fireworks bursts. You can use a bulb setting or set the shutter speed at five to ten seconds.  The fireworks will take care of the rest. If you leave the shutter open too long, multiple bursts will stack up on top of each other, overexposing the shot. © 2007 Chuck Place, Los Angeles DPA Instructor This particular image was produced in St. Augustine, Florida. I used part of the old Castillo de San Marcos and some palm trees to give the image a sense of place. I metered the fort, which was lit with artificial light, picking an exposure of f5.6, to expose the fireworks, and a shutter speed of five seconds, to expose the fort properly. Each exposure gave me different groupings of fireworks with the same properly exposed fort in the foreground. I just picked the best group of explosions.

A Trick for Shooting Fireworks

Yes, it may seem simple enough, all you have to remember to do is " take the lens cap off".  But Wait, maybe you don′t want it to be so simple. Imagine what you can achieve if you′re willing to shake things up a bit. Try this: With your camera on a tripod and the shutter set to B for bulb,  you can easily obtain multiple exposures of fireworks. First, hit the shutter.  The shutter will open...but with a lens cap on, no light will enter the camera. Then, as you hear the dull thud of the launcher and see the streaking fuse heading to the heights, you can pretty well judge when a big burst will happen. So, just before that explosion of shape and color, and with that shutter still open (on bulb), remove the lens cap and capture just the climax of the  pyrotechnic.  Then, cover the lens and wait for the next launch, repeating the process until the entire field of the photo is filled.  Obviously, some experimentation will be required, but you′ll have a blast with this one, cobbling together an unending variety of color, motion and dazling sparkles. And don′t forget that you have the option to point the camera at different areas of the sky. © 2007 Frank Siteman, Boston DPA Instructor