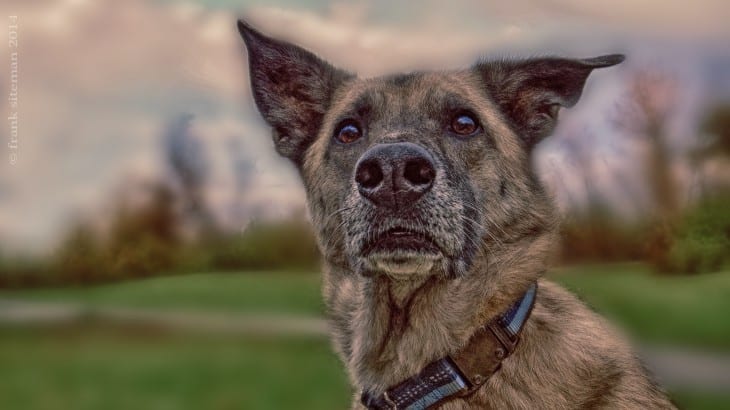 To view more of his images please visit: http://digitalphotoacademy.com/portfolio/frank-siteman/

I don’t think I’ve ever gone out shooting when I haven’t met a dog worthy of having it’s photo taken.  One technique which nearly always works is to get down to the dog’s level.  This isn’t to say that other unique angles won’t work, but what makes this particular image stand out is that “in your face” factor that you get when looking slightly up at him. I used a relatively short (24mm) lens and came in as close as I could, without altering the situation.  In doing so, I accentuated the nose and diminished the relative size of the ears.  I felt that this gave a slightly goofy, yet pleasing, feel to the photo.

Significant post production work included a NIK HDR application in conjunction with silhouetting the dog and treating the background as a separate entity. I was obviously not going for reality here, but rather a hyper-reality. To that end, I blurred an already out of focus background, while significantly sharpening the dog, except for areas (eyes, muzzle and nose) which wanted to remain crisp.

When shooting animals, it’s always helpful to have their person, as well as a helper, around.  The owner can get his pet’s attention and your helper can hold a fill card for you.  It’s important that the fill card, or reflector, does not alarm the animal however, and I’ve found that with some animals it’s best to use a bright reflector which works from greater distances.