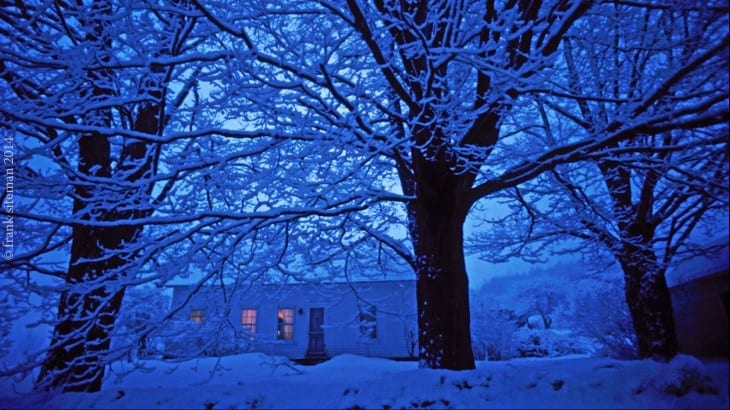 Siteman says, “This image was made while I was working on a motion picture in woodstock, VT in the late spring. One of my assignments was to shoot footage for the opening sequence and to scout locations. Driving around snow covered muddy roads was a challenge, but finding beauty in the early morning was anything but.

I found this house, enveloped by a wet sticky snow, before 5AM and being the only vehicle out at that time… and a stranger to boot, drew attention. It was just what was needed to create a human touch to offset the cold and somewhat forbidding environment.

Daylight color balance assured the light from the inside of the home would be very warm and since the sun was hours away from rising, the daylight, like the day itself, remained a very cool blue. This intense contrast of those complimentary colors, as well as the web of snow covered tree limbs, worked well to create an atmosphere of intrigue. This image, with the person peering from behind a curtain, presents an unknown story and in doing so, maintains interest for the viewer. Who’s looking at whom?”