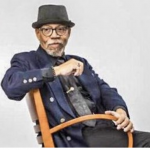 A look at Alex’s slide show reveals a special way of seeing and he conveys that passion in his workshops. He is also a talented musician, making his overall world

Back in 1961, Great Aunt Ann McAlister, gave Alex his first camera, a Kodak Instamatic 104. He was 8 or 9, he thinks. He used it to photograph the garden where he lived in Vicksburg, Mississippi, as well as his toy soldiers before he moved up north to Grand Rapids, Michigan. Alex’s dad traveled with the military as a drill sergeant and son, Alex went where dad went. His camera went with him, “glued to me,” says Alex where he took his first, “Selfie!”
In Grand Rapids, he photographed the neighborhood and did not socialize much with his contemporaries but found his creative spirit at a young age and it grew. In high school, Alex moved to the burbs Wyoming, Michigan, a very segregated community where his family was one of the two African-American families. He continued with photography as the school photographer, yearbook people and camera club. He photographed sporting events and other extra-curricular activities. As the AV and go-to photographer guy, Alex learned how to process film and soon spent all of his free time in the darkroom.
After high school, Alex moved to Allendale, Michigan, to attend Grand Valley State Colleges, now Grand Valley University where he earned a degree in Fine Arts/Art Education. The story about that was he began with the expectation of becoming an oil painter but hanging out with photographers he soon reverted to what he began as a youngster in Vicksburg.
After college Alex was hired by the Grand Valley as a staff photographer and graphic designer assistant. He freelanced as a wedding and portraits shooter and then got a steady gig as the catalog photographer for Amway Corporation. He inevitably picked up other corporate clients like American Health, BBC-Lion Heart TV, Barco Graphics, Compuware, Detroit Edison Electric, Gerber Baby Food, K-Mart and others.
His byline found its way into Life Magazine, Sports Illustrated, People, and other well-known pubs.
As for teaching Alex is passionate beginning with Elementary students but soon got the boot. He moved over to teach at the Detroit Children’s Museum. He leads workshops across the state, among them Edsel and Eleanor Ford House. He also teaches smartphone photography for senior citizens at the YMCA.
Call Digital Photo Academy at 1 877 372 2231. Lots of people seem to hang up if our welcome recording comes on instead of a live voice, but we promise to return your message within a day or two if you leave one with your name and number.  It would be even better if you included your e mail address as well as the date and city of the class you are considering.  If leaving a voice mail message is not your thing, please email us at DPAbooking@digitalphotoacademy.com or Richard@digitalphotoacademy.com.
1
Tweet