Use a Low Camera Angle for Impact 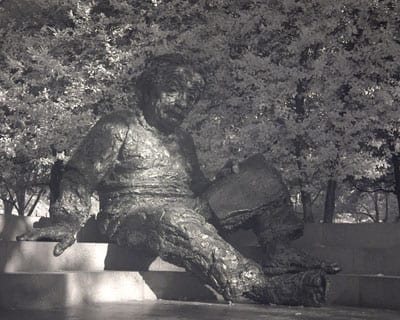 I particularly like the Einstein Memorial at the National Academies of Science. The memorial is located on the north side of Constitution Avenue, NW, at 21st Street, Washington DC. A low camera angle often adds impact and cleans up a background. This memorial is a tactile, climb-on-able, visually interesting object that is always fun to photograph. The attached image was taken with a digital infrared camera.

From Wikipedia:
The Albert Einstein Memorial is a monumental bronze statue depicting Albert Einstein seated with manuscript papers in hand. It is located in central Washington, D.C., United States, in a grove of trees at the southwest corner of the grounds of the National Academy of Sciences on Constitution Avenue, near to the Vietnam Veterans Memorial.

The statue was sculpted by Robert Berks in 19 sections and then welded together. It weighs 7,000 pounds (3.2 metric tons) and would stand 21 feet (6.4 m) high. The statue sits on a bench that is white granite from Mount Airy, North Carolina.

The statue and bench are at one side of a circular dais, 28 feet (8.5 m) in diameter, made from emerald-pearl granite from Larvik, Norway. Embedded in the dais are more than 2,700 metal studs representing the location of astronomical objects (Sun, Moon, planets, 4 asteroids, 5 galaxies, 10 quasars, and many stars) at noon on April 22, 1979 when the memorial was dedicated. The studs are different sizes to denote the apparent magnitude of the relevant object, and different studs denote binary stars, spectroscopic binaries, pulsars, globular clusters, open clusters, and quasars.

Written on the papers held in the statue′s left hand are three equations, summarizing three of Einstein′s important scientific advances:

the theory of general relativity:

the equivalence of energy and matter:

Standing at the center of the floor patterns and speaking towards the statue produces an interesting acoustic echo.